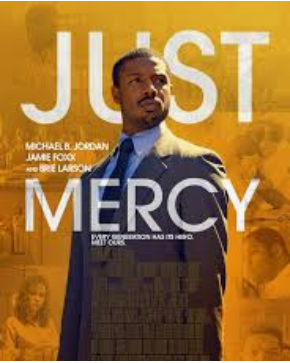 I saw the movie “Just Mercy” yesterday. It is the story of Bryan Stevenson, the founder of the Equal Justice Initiative organization. There is a scripture that says, the Lord is a rewarder of those who diligently seek Him. GOD is Truth and Light, and this movie does a great job of telling how Mr. Stevenson has spent his life in pursuit of truth to bring liberation to those held captive by darkness. The movie is set in Alabama. A state that has historically depicted the heart of Jim Crow segregation and racism. The movie brings to light the true stories of horror which black people have experienced, being subjected to a judicial system which considers them unworthy of justice; equal protection under the law. Justice, equal protection under the law, is a right of all citizens of the United States. The fact that black people of color currently and historically have been denied that right demonstrates an unwillingness to grant us full citizenship. The evidence is not in the exception of the few but in the status quo of the millions.

A PEW study revealed that in 2017, blacks represented 12% of the U.S. adult population but 33% of the sentenced prison population. Whites accounted for 64% of adults but 30% of prisoners. Another way to represent these numbers is there were 1,549 black prisoners for every 100,000 black adults – nearly six times the imprisonment rate for whites (272 per 100,000) and nearly double the rate for Hispanics (823 per 100,000). Over the past couple of years, the disparity in these numbers has shrunk. It has been suggested by a few studies that this is due to a decline in the use of crack in the black community, curtailing incarceration in connection with drugs. Another contributor to the gap closing is the incarceration of white males has starkly increased due to methamphetamine, prescription opioid and heroin use, combined with the prosecution of white males doubling for sex crimes.

I was moved by the number of white movie goers in the theater to see this film. It stirred hope in me that there is growing interest in understanding the root causes of the disparities seen across this nation in the quality of life between the masses of blacks and whites. I also hope that more of my white sisters and brothers will venture beyond regular news sources to documentaries, films, and articles that publish truth not aired in the mainstream, which go a long way in explaining the catalyst for protest carried out by black people. Instead of seeing the protesting of blacks as unpatriotic, maybe people will begin to see it as a reasonable response to the hypocrisy displayed by a country that boast one nation, under god, indivisible, with liberty and justice for all.

Some films and documentaries I would recommend are “13th” by Ava DuVernay, “Black In Latin America” by Henry Louis Gates Jr., “The Way They See Us” by Ava DuVernay, and of course “Just Mercy” by Destin Daniel Cretton.