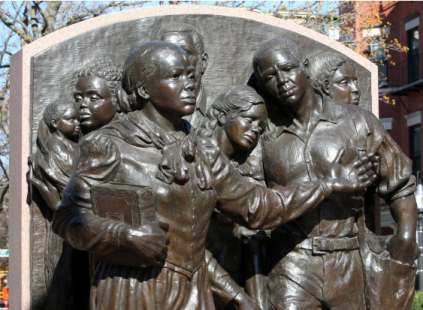 Coming out of the buzz surrounding the recently released Harriett Tubman movie is controversy over a quote being attributed to her. Harriet Tubman is quoted saying she would have freed more people had they known they were enslaved. Whether Harriet Tubman said it or not, the principle within this statement was in effect then just as it is now. People are deceived about what liberty is, and they are often unaware of a greater life available to them. Christ stated that His arrival on earth marked the fulfillment of the prophecy of Isaiah 61:1, that He was the anointed one which had come to proclaim liberty to the captives. Now, over 2000 years ago for Christ and over 200 years for Tubman, millions are still enslaved.

The gospel of Christ is meant to liberate us. The scripture says, “He who the Son makes free is free indeed.” What does this mean? Here is a definition of free coming from Merriam Webster’s dictionary which says it well:

[: Not determined by anything beyond its own nature or being; choosing or capable of choosing for itself.]

The life of Christ, in those born of His spirit, makes them free to operate from a newly inherited divine nature, unhindered by external forces. The light of truth with in His spirit reveals options once hidden in darkness. Though there are influences and forces from this world and from our own bodies, the power of His spirit  frees us to choose what actions we will take. That is freedom. Those who are born again are no longer enslaved by the nature of sin. This is the liberty which the Spirit of GOD provides us as spoken of in the bible. Though this is sound biblical teaching, it is uncommon to hear this taught in churches or professed as a belief by Christians. Satan has crippled the belief of many Christians through religious doctrines that don’t challenge their faith or the power of GOD in their lives. My book, “True Heritage: Recovering From Spiritual Identity Theft” offers a path of restoration from this condition, which has worsened in these current times of greyness and tolerance. I believe “True Heritage” was inspired to ignite the fire of the spirit in the hearts of those who read it, and to reflect the true light of the gospel, through illuminating the tangible benefits won for us through the Salvation of Christ.

Here is an excerpt from “True Heritage”:

“The person you think you are could very easily be based on spiritual puppetry, where you are the puppet. Another way of looking at this is psychological, or mental manipulation, based on ideas and thought patterns ingrained through exterior suggestion. The majority of the people in the world have been subjected to this type of manipulation. What most people call “freedom” is, in effect, slavery, because they are being controlled by influences they are not aware of. When Yeshua read the prophecy of Isaiah, as recorded in the book of Luke, chapter 4:18 (KJV), He stated, “He was anointed…to preach deliverance to the captives.” People are captive, and don’t realize it.”